the weekend’s over and now it’s football time. It’s an odd one, having a game of such importance on a Monday night but there you go. The only bit of team news this morning is a report in The Sun saying Wojscez©® could play because Lukasz Fabianski is struggling with some kind of unspecified leg injury. Quite how much truth there is in it I can’t say but if that were the case I wouldn’t have too many worries. The younger of the Poles doesn’t really strike me as the kind of chap who’d be overawed by a game like this.

For me the only other question marks are over midfield and that obviously involves Cesc. Is he fit enough? The manager will make the decision on that. If there are no worries about him then he’s got to play. Then it’s a matter of who plays at centre-half. I suspect we’ll see Koscielny alongside Squillaci but I would prefer to see Djourou whose partnership with the elder Frenchie just seems a bit more steady. 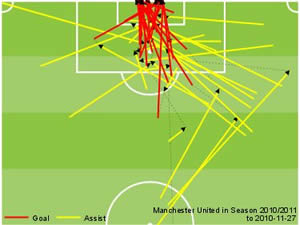 In the game against Fulham we looked brittle down the middle until he came on. I’m not blaming Koscielny as there were other factors but I just think Djourou’s experience and extra physicality might be important. As well as that it’s a big night for Gael Clichy. Nani plays on United’s right hand side and currently has the most assists in the Premier League.

When you look at the graphic which shows how many of their goals this season have come from that side then you can see how important it is for Clichy to play well.

Not only that though. The team needs to be mindful of United’s threat from that area and Clichy needs to be given the support from midfield, and even Andrei Arshavin, if we want to nullify what is clearly an area of strength to them. Thanks to Opta for the image.

I don’t have a similar graphic for Arsenal but if I had to guess I’d say our right hand side has been most productive this season. Sagna’s crossing has improved and there’s the small matter of Samir Nasri. The Frenchman is our form player and it’s interesting that he’ll be up against Patrice Evra, a man with plenty to say before the game. Nasri says he wants to do his talking on the pitch, which is by far and away the best place to do it, and his movement and pace is sure to trouble United defensively.

I think Arshavin will start on the left and we need a big game from him. As I’ve already pointed out he’s got to work hard and we’re looking for him to produce far more than he did against Fulham. The manager said his game is based on risk, which is nice when it works, but a little more common sense is required tonight. He can’t lose the ball the way he did last weekend because United are far more capable of punishing us. Up top I suspect Chamakh will start and will be tasked with giving Ferdinand, more than Vidic, plenty to think about.

With Jack Wilshere likely to come back into midfield alongside Alex Song there is a huge onus on both of them to carry out their defensive duties properly and sensibly. We suffered from lack of midfield protection against Fulham. I said afterwards that better sides will exploit that and United are a better side. We have a tendency to get caught with too many players forward and on the break – as they showed against us at home last season – United can be lethal. It won’t take much from us, just a bit of common sense and a touch more caution, and we’ll be much more solid.

They’re unbeaten in the league this season, home or away, but at home they’re very strong. They’ve won seven out of eight, scored 24 goals and conceded only 6. Arsenal being Arsenal though won’t go there with anything else in mind but to win the game. Arsene Wenger says:

It’s a big game for us because we know that we have to convince people that we can do well in the big games. At the moment, we are in a strong position in the league. We go away for a big game. One or two of the big games, we need to win away from home. That is what is at stake for us.

Yesterday’s draw between Sp*rs and Chelsea was another good result for us. At the moment we’re a point ahead of United who have a game in hand. A win tonight would put us four points ahead and really would be a statement of intent. I think we’re capable of winning and away from home we’ve been very good (Chelsea apart). It’s a chance for the team to show that despite some disappointing results we have the balls to take things by the scruff of the neck.

Nobody seems to want this league this season. It’s about time we showed that we do. That said there’s still a really long way to go and tonight’s game isn’t make or break but you just get the feeling that a good performance and result tonight would do us the world of good (and not just for the obvious reasons). In my opinion United have won things over the last few years because they wanted them. I don’t think their team, in terms of quality, was anywhere near as good as the one we were such rivals with in the past, but their attitude and will to win was decisive and, whatever you think about them, hugely admirable.

It is something that has been lacking in Arsenal teams in recent seasons and it’s about time we found that again. At times this season we’ve shown good character and we’ll need all of it tonight if we’re going to get the result we want. Whatever happens all we can ask is that they do their best, that every player realises the importance of this game and gives 100%, and if that happens I’m confident we can take the three points.

If you’re stuck working or can’t find a TV or stream later, I’ll be doing a live blog with continuous updates from the game. Check back later for a post which will give you details of that.

Also, as a pre-game bonus Leopold has been in touch with his thoughts ahead of a huge fixture on the real ANR.

So, just a whole day to pass until kick-off. I have to say I feel strangely calm about this one, whether that serenity is still in place by 8pm this evening remains to be seen.

Have a good day and come on you Goooooooooooooners.