Arsenal 5-1 Shaktar: A touch of class

On paper it looked as if it might be tricky, in the end it turned out to be one of the easiest European nights in memory. A Shaktar Donetsk side that came looking not to concede were undone twice in the first half by their own mistakes.

The first goal came from a corner. There looked to be little danger until the Pyatov did his best Arsenal goalkeeper impression and dropped the ball at the feet of Alex Song. The Cameroonian tried a rather ridiculous flick and got lucky as it rebounded off the defender and back off him into the net.

The second came from another error. Song’s cross looked like bread and butter for a player as experienced as Darijo Srna but his touch was poor and Nasri was on hand to take it off him and smash it home to make it 2-0. A fine finish, his sixth goal so far this season, and a moment of quality in what was a dreary first half. The game was congested in midfield with neither keeper really called into action. Arsenal looked the most threatening, Shaktar never troubled Fabianski as far as I can remember.

They started the second half in more dangerous fashion, Luiz Fabiano got in behind the Arsenal defence but Fabianski stood up well and made a decent save. Then they self-destructed again. As Nasri was preparing take a free kick there was the usual jostling in the area, the ref came over and told Adriano to cut it out. Nasri took the free kick, Adriano had hands all over Djourou and the ref gave the penalty as well as a yellow card to the Shaktar player for being unspeakably dense.

Cesc stepped up and smashed the penalty high to the keeper’s right. 3-0 Arsenal and there was never going to be any way back for the Ukrainians after that. That was Cesc’s last involvement as he was replaced by Denilson. He looked, at times, like a man who has missed five games. His touch and sharpness are clearly not quite there yet so getting just over an hour under his belt ahead of Sunday’s game against City is good stuff. 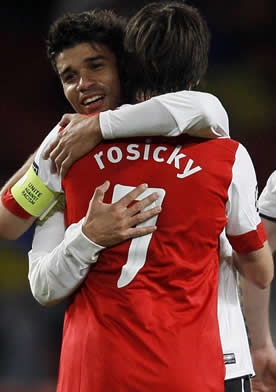 Shaktar made a change then too. Adriano making way for Eduardo who was greeted with warm and generous applause by the Arsenal fans. The team weren’t so welcoming and Jack Wilshere’s first goal of the season was a thing of real beauty. He exchanged passes with Chamakh and Rosicky before dinking it beautifully over the keeper to make it 4-0. In a week when the focus has been on his tackling it was a timely reminder that the real reason people should be talking about him is because he’s an outstanding young footballer.

There was a touch of comedy to Arsenal’s fifth. Nasri chipped the ball over the Shaktar defence who were rushing out to play offside. It found its way to a clearly onside Chamakh who had the time to look across at the linesman to make sure before setting a Champions League record by scoring in six consecutive games. It’s also his sixth goal of the season and the impressive start to his Arsenal career continues.

The goal of the night though came in the 82nd minute when Eduardo got on the end of a cross from their right and side-footed home a Shaktar consolation. It was cheered as if it were an Arsenal goal, even the announcer got in on the act, and while Eduardo stayed true to his word and didn’t celebrate I don’t think anyone would have begrudged him a smile.

It’s easy to cheer a consolation goal but it was a classy moment and one to remember. We might well be unforgiving and brutal to those who we feel have wronged us but there’s plenty of love for players who have done their best and not left under a cloud. Eduardo’s reception was up there with the welcome given to Robert Pires when he came back with Villarreal and you’d have to have a hard heart not to have been even a little bit touched by it.

It was the perfect preparation for Sunday’s trip to Manchester. The result was great and the performance was fine. There’s no doubt there’s room for improvement in that regard but that’s not a complaint. It takes a little while to build momentum and we’re doing that quite nicely.

In terms of individuals you only need to read the manager talking about the future of a Cesc – Wilshere midfield axis to know that the youngster had another very solid game. Other than that we were pretty solid across the board. At times I looked at Rosicky chasing back and making tackles and wished Arshavin had half that energy and enthusiasm, he’d be an entirely different kind of unplayable. Theo Walcott made his return from injury too and looked a bit rusty as you might expect but that’s a positive all the same.

So, we sit top of the group with nine points from nine and three games left in the qualifying round. Next up is a trip to the Ukraine where I suspect Shaktar will be a different proposition from the one we saw last night. A point will be all that’s required to ensure qualification and based on what we saw last night you’d have to think it’s well within our capabilities.

Now, the eagle-eyed amongst you will have noticed some minor changes around here. Arseblog is back at arseblog.com so the first thing I’d ask you do to do is update your bookmarks and those of you who have blogs/websites etc if you could update your links that would be very much appreciated.

Those of you who view the site via RSS or just get the mailing list shouldn’t notice anything at all – but if you have signed up for the mailing list in the last four or five days you may need to do so again as the database has been moved to a new server.

As for what’s happened with OleOle it’s just one of those things. There’s no ill-will or falling out but simply a case that the current economic climate has made life very difficult for everyone. As OleOle was my full time job it now falls to me to try and make this version of Arseblog something that can remain both a labour of love and a way to make a living. There are a couple of things planned which I’ll get to in due course but if anyone feels that there might be a way in which they and Arseblog can do business together please get in touch.

There’s an award winning podcast to sponsor, a mailing list with nearly 10,000 Arsenal fans on it, and a blog which will continue in the finest Arseblog traditions. And if anyone needs a voice-over artist I’d be more than happy to speak into a microphone for you at any stage. Seriously. Contact details are here.

Obviously there are going to be some teething issues with the new site. I’m aware that some of the older archives don’t work but if you notice anything else please let me know. We’ll be tinkering away at it for a couple of days yet so hopefully we’ll get everything sorted as soon as possible. There may still be some DNS issues which will just take to sort out so some patience may be required.

As well as thanking all of you who visit and read every day I want to pay special thanks to ex-pfc wintergreen for his help in matters legalese and especially to Tom who has done a huge amount of work to get things ready. From a technical point of view I couldn’t do it without him. I can do the colouring-in but the nuts and bolts, in particular the arses, are all down to him. He is a legend.

So that’s about that. Let the Arseblog continue. You majestic cunts.

Sort your Christmas shopping with these Arsenal...