A game of two halves

Sometimes a clichÃ© is a clichÃ© because it’s true. Yesterday’s game was the ultimate game of two halves. The first was full of misery and despair. After a great start in which we dominated the game and made plenty of chances, none of which we took, Bolton took the lead. A cross from the right and some terrible defending by Kolo allowed Matt Taylor to score. Some people suggested Almunia might have been at fault here but a header from 6 yards would beat every keeper in the world. The problem was the defending, not the keeper.

Then it got worse. Abou Diaby was rightly sent off for a terrible challenge on some Bolton cunt. I don’t know who he was but the tackle was over the top, badly timed and given how we’ve complained about how Eduardo was taken out there can’t be an Arsenal fan in the world who didn’t wince at Diaby’s challenge. No complaints from here about the red card and our task was made even more difficult when Bolton went 2-0 up. Clichy, eschewing the crudeness of just hoofing out of defence, played it to Flamini who got caught in possession at the edge of the box and the ball came to Matt Taylor. William Gallas won’t want to see too many replays of it, he turned his back on the ball and the deflection it took off him gave Bolton the two goal lead. 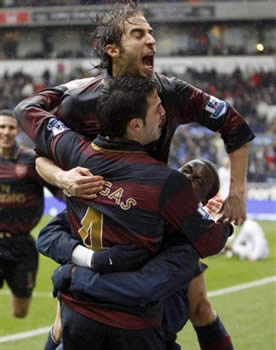 Half time. Seriously, I’ve never known the Arseblog community to be so downhearted and disillusioned and upset. We all knew what was wrong. Arsene needed to spend. These players didn’t have the character of the old school. They lack balls. It was the end of an era. And it’s understandable. 2-0 down to a pack of shit cunts like Bolton will provoke a serious and unhappy reaction from most Arsenal fans. And as the second half began Bolton put some serious pressure on. There was a series of corners and Manuel Almunia made a fucking awesome save from some Bolton cunt. I’m not sure how much he knew about it but 3-0 would have been game over. As it was the turnaround was coming.

First William Gallas made up for his terrible defending by popping up the back post to sidefoot home from a Cesc corner. 2-1 and sure anything could happen. Then some lovely football saw Flamini’s shot saved by the keeper, Hleb charged in for the rebound and was felled by Cahill. Robin van Persie slammed home the penalty to make it 2-2. And Robin, had he been sharper, could have won the game twice. First after great work from Theo Walcott who must be close to a start on the right hand side now and later from someone else but both times the shots went high and wide.

It was in injury time the winner came though. The ball came to Hleb in the area, he cut if back for Cesc whose mishit shot went off a couple of Bolton defenders and scutted over the line to make it 3-2 Arsenal. Honestly, I went mad. That was just amazing. For the 10 men to turn it around against Bolton like that was incredible. There may have been questions about their character, their desire and so forth, but fuck me they stepped it up and they turned that game around. Brilliant. And tremendously enjoyable. When you stop thinking about all the poor things that happened and focus on the result it’s great fun. Who can not enjoy last minute winners?

I have to be honest. In online and text discussion at half time I was seriously worried about these boys. Not through lack of support but realistically the recent form can’t have done anything but make you worried. At 2-1 I said to someone that a win would be an incredible thing, not just because we’d come back from two down with ten men, but for the boost it would give the squad, the belief it would instill. Sometimes it takes something extraordinary to get a season back on track and if yesterday wasn’t extraordinary then I don’t know what is.

I can’t remember a better comeback than that – to be 2-0 down, with 10 men and win 3-2 with just half an hour to go is a great credit to the team. The last 30 minutes we had chance after chance and in the end we were a bit lucky on the third goal but we did absolutely everything to win the game and we got a very important victory for us.

Seriously though, there is an element of getting out of jail on a technicality with this one. We dominated the early part of the game and poor defending saw us behind with their first chance. As much as we enjoyed this, and fuck me I really enjoyed this, we have to be mindful of why it was we were 2-0 in the first place. But that’s football. At half-time I wouldn’t have put too much money on us coming back and winning the game but as I said above it’s games like this that can get you going after a bad spell. Fingers crossed this will get this squad of players believing they’re capable of winning games again with so many important ones coming up.

I should also point out that the win yesterday was entirely down to me and my one eyed cat. At half-time he wanted to go out so was mewing at the back door. I said ‘Ok, you can go out but remember that we saved your life when you had cat flu and cat aids and cat spina bifida and cat plague and Arsenal need three goals so come on, give me three goals you little tabby bastard.’

He said ‘mew’. I took that as acceptance and look what happened. It’s all down to the one-eyed cat. Arsene, I’ll rent him to you for Â£500 a week.

I don’t have that much more to say. I’ve got a really early flight this morning so that’s as much as I can get together. But hopefully this is something that can kick start our season again. And hopefully it’ll help Bolton get relegated, the cunts. I mean how can you possibly have any sympathy for a crowd of cunts that sings ‘Same old Arsenal, always cheating’ when their own player is being helped off the pitch. Enjoy the Championship, motherfuckers.

I’ll talk to you tomorrow from the west coast of America. Till then, amigos.