How nice after a couple of days of dealing with the dark side that the focus today can be on the football. Our fine start to the season continued with a hugely encouraging performance against Portsmouth.

We got off to a great start when David James upended Robin van Persie in the box to give us a penalty which Emmanuel Adebayor slid home very nicely. Despite it being a clear goal scoring opportunity referee Mark Halsey didn’t see any reason to give a card to David James, and considering later events he can count himself quite lucky.

We were playing well, spreading it to the two full backs, Clichy and Flamini who I thought were both excellent, and causing them problems without ever really troubling them too much. Cesc had a decent long effort saved and it was Cesc who put us 2-0 up when he reacted quickest when Gilberto’s header from a corner was blocked. It was a real poacher’s goal and that was his 4th of the season so far. Arsene Wenger is comparing him to Paul Scholes, but only because he’s scoring goals from midfield and not because he’s a poxy little ginger cunt. Senderos had a header saved by David James and that was that for the first half.

The second was more or less the same until Mark Halsey sent off Philippe Senderos. The Swiss defender was holding an offside line but Kolo Toure played Kanu onside. There appeared to be minimal contact but Kanu went down and out came the red card. It was similar to the one against Boro last season when Yaukubu did the same but the contact here was even less than that. Perhaps Philippe Senderos is the strongest man on earth. It seems the slightest touch can make even the most muscualar African crash to the floor in a heap. He doesn’t know his own strength. They should send him over there to sort of civil wars simply by barely touching people. I thought it was very harsh, all the same, as he was having a good game and doubly so because of what James got away with in the first half. He’ll now miss one game, the North London derby against Sp*rs. 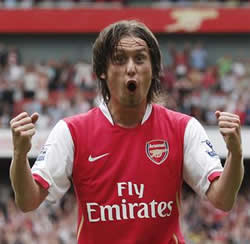 The sending off didn’t seem to affect us too badly though. Gilberto moved back into defence and when Clichy won a free kick just outside their box, almost level with the corner flag, a quick pass from Cesc to Tomas Rosicky found the Portsmouth defence still trying to figure out what to do and he buried a low shot between Glen Johnson’s legs to make it 3-0. Quick thinking from us and I don’t think I’ve ever seen a defence do what the Portsmouth defence did. They completely switched off. Hilarious. They scored almost straight away, Utaka put in a ball from the right and Kanu tried to backheel it, but only ricoched the ball of his own leg and into the goal. As bizarre a goal as you’ll ever see.

There was even time for more chances as Diaby somehow headed Clichy’s cross wide and he also had a fierce drive fly just over the bar. It really didn’t look like we were playing with 10 men even if Portsmouth had a couple of attempts on goal which forced good saves from Manuel Almunia. So that was that. 3-1 and we’re up into second.

Overall I thought this was a fantastic performance. As I mentioned, Clichy and Flamini were brilliant, Rosicky had one of the best games I’ve seen him have in an Arsenal shirt, and once again the midfield came up with the goods when the strikers were struggling. Penalty apart both van Persie and Adebayor didn’t really threaten but while that would have cost us last year the midfielders are winning us games. It really was one of the most enjoyable performances I’ve seen from us in a long time – the boss called it a ‘pleasure to watch’. We looked so sharp and quick, the passing was good and you can almost see the confidence growing.

It’s just a shame it’s a couple of weeks till our next game due to the international break. Hopefully we can pick up where we left off when the real football starts up again.

In the other Premiership games United scraped a win against Sunderland, Liverpool hammered already relegated Derby while Villa stuck two past Petr Cech to inflict Chelsea’s first defeat of the season on Mourinho’s men. You might remember Ashley Cole in the newspapers last week saying how this Chelsea side could be ‘invincible’ like the Arsenal side he was a part of. Ooooops. Hahaha, cunt.

And that’s it. More tomorrow.

Oh, finally – to anyone who has sent an email over the last couple of weeks and not gotten a reply. Sorry. I’ve been so busy I just haven’t had time to get through them all but will try and work my way through the backlog over the next couple of days. Cheers.