Eto'o for Â£20m and other Sunday stuff

Morning all. A quick one this Sunday morning and there are a few bits and pieces going on.

The People suggest Arsenal are set to make a Â£20m move for Samuel Eto’o in a rather speculative article. You would have thought that some kind of swap deal would have been done if we were serious about Eto’o but there are still whispers that suggest we shouldn’t totally rule this one out just yet.

The News of the World says we’re after Carlos Tevez and if the Argentinian decides to stay in England it’s between us and Man United for his signature. They say we want him on a year’s loan though which is not something I’d be too keen on, I have to say.

Sven Goran Eriksson wants Nicolas Anelka at Man City. He also wants his touchline seat to be a 6 foot high throne with the words ‘Touch me’ on it. Allegedly.

Florent Malouda, long linked with us, has decided he wants to join Chelsea and has held talks with Jose Mourinho about it. Mourinho will, of course, deny all contact with him and will insist he was in Madrid talking to Raul, or something.

Via A cultured left foot comes this poll from William Gallas’ official site. Fuck me… 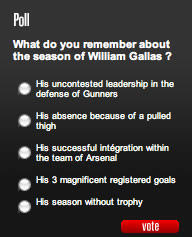 And that’s about that. I know people are all a bit stressed at the moment because Thierry’s gone and we still haven’t signed anyone and Sp*rs are splashing cash around like Loadsamoney but there’s still lots of time. All I can say, having given it careful consideration, is that it is now truly time to panic.

I suggest that when you finish reading this blog you run around waving your hands in the air and shrieking in a high pitched voice until we make some signings. In fact, we should mobilise a whole group of fans to do this outside the the Grove and the glass shattering screams would spark the club into life and they’d get busy in the transfer market.

I don’t see what else we can do, can you?