If you were walking down the street and you saw two buses about to explode, for some reason, and one bus contained a squadron of killer robots who were going to give everyone on earth the plague after they shagged everyone’s wife and smeared poo all over your freshly painted house and the other bus contained the Blackburn Rovers football team and you had to save one then there’s no question we’d all get the black death and have stinky walls. What a bunch of feckless cretins they are their supporters are. 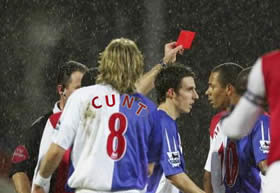 Our task was made difficult on 13 minutes when Robbie Savage reminded everyone why he’s right up there with the most odious, obnoxious, repugnant, intolerable, loathsome cunts in the game. He twice fouled Gilberto who reacted, admittedly when he shouldn’t, and kicked out at the Afghanhoundalike wanker who went to ground like he’d been kicked in the bollocks. Cretinous referee Rob Styles fell for it hook, line and sinker and gave Gilberto a red card.

I suppose going by the letter of the law it was a red but the fact that Gilberto now has to serve a three match ban for ‘violent conduct’ is the real killer though. Again it highlights the problem with the system where Gilberto’s offence carries exactly the same ban as someone who goes studs up to deliberately hurt somebody. Perhaps they need to review straight reds on a case by case basis but I wouldn’t hold my breath.

Anyway, what is they say about cheaters never prospering? If the red card did anything it galvanised Arsenal and the boys put in an awesome performance which blew to smithereens the notion that Arsenal can’t play ‘oop norf’ against a physical side. And make no mistake, that’s what Blackburn are. A pack of cloggers based on the worst of their manager when he was a player. A man capable of scoring outstanding goals Mark Hughes was a kicker and a cheat and this Blackburn team has been made in his image.

Kolo Toure opened the scoring when he rose to head home a Thierry Henry free kick not long after Rob Styles allowed Lucas Neill to stay on when he pulled back Robin van Persie. He looked like the last man and had it been closer to the goal the card might have been a different colour but then we’re talking about Rob Styles here, the useless cunt. In the second half we never really looked under any pressure and killed the game in the 71st minute with a truly outstanding goal.

Thierry Henry picked the ball up in our half, drove into the Blackburn half, gave it to Cesc who played it right back to the captain and Henry’s first time shot into the top corner was just out of this world. Considering the situation, the fact we were away from home, outnumbered and with only a one goal lead capable of being pegged back this was just a fantastic goal. There isn’t another player in the world who could have scored that goal and it is so good to have what looks like the ‘old’ Thierry Henry back.

After that there was no coming back for Blackburn. Of course there had to be a further contribution from them when Tugay’s cynical and deliberate foul on Cesc left the young Spaniard sporting an ice pack after the game but we should thank our lucky stars because it could have been worse. It was a nasty tackle and designed to hurt which is why Gilberto’s three match ban for his red card sticks in the throat so much. Still, the positives far outweigh the negatives.

To go to Blackburn, play most of the game with 10 men and come away with a win and three points was a real demonstration that this team has more about them than nice technique. Rosicky, Hleb and Fabregas showed they can play in the same team – even without Gilberto – Clichy had a great game at left back, the two centre-halves were solid and mopped up all around them and up front Thierry Henry showed just how important he is. There was a spirit and determination, not only to not avoid defeat but to win the game, that was very impressive. It’s like the team has turned a corner in a way. It was old school, vintage Arsenal and hopefully the lads will gain as much from this as the fans did.

The team is going from game to game, slowly becoming real lions. I feel for a while we’ve gained in maturity at the back. We didn’t have a panic and won challenges. It was a superb victory under very difficult circumstances, a good mixture between quality, spirit and solidarity and it was great to see commitment mixed with class and technique.

He has much to be proud of today. Now, we have a week off to prepare for the arrival of Manchester United at Ashburton Grove which is going to be some game.

Not much else happening. Newcastle want Jeremie Aliadiere on loan according to reports and that’s about it. Now, breakfast, the Sunday papers and a game of five a side later and that is Sunday sorted.

Previous articleLauren can go, Freddie will stay, I don't Aliadicare about Jeremie…
Next articleShut up Robbie Savage, keep it up Philippe Senderos