Well, it might not have come as any surprise but yesterday’s announcement that Robert Pires has agreed a two year deal with Villarreal was a bit sad all the same. What a fantastic player he’s been for us. 284 games and 84 goals made up of absolute stunners and scruffy follow ups. 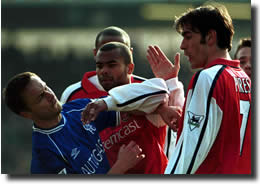 For me that’s what my abiding memory of him will be. He was clever on the ball and creative, although his cruciate injury robbed him of his deceptive pace, he passed it beautifully but his goalscoring and finishing was just top class. Not only could he score brilliant curlers and individual goals he was a brilliant poacher as well. He was always waiting for a rebound or a fumble or hanging around the back post, just in case, and that just in case became ‘Thank you very much’ plenty of times.

He was just clinical. Left foot, right foot, from distance, free kicks, even the odd header. His first goal for the club was an absolute belter against Lazio. His last was a scrappy one against Wigan. But there were so many great ones inbetween. The curler at Liverpool in the unbeaten season, the 35 yard lob over the keeper against Southampton before he scuttled in the winner against them in the cup final, the famous lob over Schmeichel which made Andy Gray wee in his pants, the belter against Birmingham and all the goals against Sp*rs who must be happier than anyone to see him go. He never once finished on the losing side of a North London derby and scored 8 goals in 12 appearances.

After six wonderful years at Arsenal, full of fantastic moments, I have decided to accept a new challenge at Villarreal for the next two years of my career. I am very grateful to ArsÃ¨ne Wenger, the players and all the fans for their amazing support over the years. 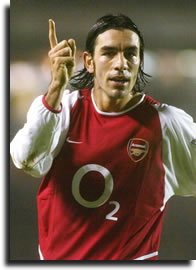 Robert has had six tremendous years with us and made a huge contribution to the teamâ€™s success during his time here. He is not only a great footballer but a good man, so of course, we are sad to see him go.

And that’s the thing, I think all Arsenal fans are sad to see him go. He might not have had his best season but he’s given us such enjoyment over the years. As well as the goals there have been other great moments such as this clip (poor quality but still), all the players doing the ‘We’re not worthy’ bowing in recognition of his amazing form in 2002 (at that time I’m not sure there was a better midfielder in the world), this season’s tackle on Vieira and him clipping Dennis Wise around the ear in the picture above will always be one of my fondest memories of him. If you click the pic you can get a nice big version for yourself in memory of Le Bob.

It’s such a shame his last appearance was so brief due to the sending off in the Champions League final but no matter. That won’t make any difference to how he’s remembered.

Thanks for everything, Bobby. We’ll miss you.

So after his departure and the signing of Rosicky, who you have to think is his direct replacement, we’re back at square one in terms of the squad for next season. It’s good that we’ve replaced quality with quality and I’m not going to compare the two players directly but we need to add to what we have, not just replace those who are leaving.

We know Dennis is on his way and it’s likely that Sol Campbell will go and be replaced by a young English centre-half but Ashley Cole’s situation is less than clear once again. Despite some positive noises from the player about staying it seems his agent, Jonathan Barnett, is determined to engineer a move for him. His relationship with David Dein is pretty much non-existent and Barnett blames him squarely for the investigation and charges brought against him by the FA.

If Cole wants to stay, genuinely wants to stay, he’s going to have to go against the wishes of his long-time agent who sees pound signs when looking at the player – as evidenced by the meeting with Chelsea.

Anyway, it’ll make for an interesting summer for Arsene, if not the rest of us. A quick round-up of the rest of the day’s stories.

Theo Walcott got half an hour for England B last night and didn’t even score one let alone a hat-trick. I think we’ve wasted our money on this kid. Sol Campbell played and didn’t run away crying so our chances of getting a few bob for him increase if he doesn’t retire while Ashley Cole played as well. England lost though. Oooops.

Today is May 26th. A day of reflection. A day to cast our minds back. A day to ruminate. A day to bow our heads for a moment, then look to the sky and say “Thank you, St Michael, for scoring that last minute winner 17 years ago to make the scousers cry. Amen.”

Happy St Michael’s day to all of you. As is tradition please pay homage at Arseweb’s Anfield 89 page or download Arseblog’s Anfield 89 wallpaper.

Ok, that’s another working (heh) week over. Till tomorrow, arsefans.

Previous articleHow fast is Theo Walcott?
Next articleHow it happened