A tough weekend for the top clubs, all three teams winning by just a single goal. Chelsea left it very late against Blackburn, United had Graham Barber and his incompetent assistant to thank for van Nistelcunt’s late winner, while Arsenal found Man City a tougher prospect than normal as they sat back and defended like your common or garden Aston Villa.

Still, the manager was happy with the display while Kelvin Koogan was unhappy with the performance of referee Alan Wiley. Can’t say I’m too surprised. I know if a player raises his hands he’s asking for trouble, but a few yellow cards would have solved the problems. Now we’re going to get a load of crap about Ashley Cole, melees, brawls, fisticuffs and the whole lot. And we didn’t even have a player sent off. Expect something from our old friend James Lawton in the coming days.

After game Cole said “I feel sorry for Anelka. He shouldn’t have done what he did but he shouldn’t have been sent off. I only did the same as him. We should both have got red cards or both yellows.”

The win yesterday means Arsenal have equalled their best ever start to a league campaign, 23 games unbeaten. In 1990-91 we had 15 wins and 8 draws, this time round it’s 16 wins and 7 draws. 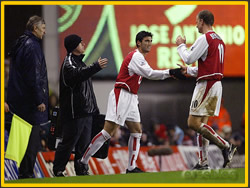 The boss was also happy with the debut of Jose Reyes (whose song seems to ‘José Antonio’ to the tune of ‘We’ve got Silvinho’), saying “What he did, he did well. He created a chance and had one chance and the 20 minutes were positive. It is a new atmosphere and a new physical test for him.He was surprised by the cold and he knows it will take a little time to adapt.”

Even Alan Smith was impressed. I suppose we’ll get to see him against Boro on Tuesday. Anyway, to celebrate his Arsenal debut you can download a wallpaper of the momentous occasion by clicking on the image on your left.

Yesterday’s News of the World ran a story about Sylvain Wiltord which prompted other news feeds to run with the ‘Wiltord expects Arsenal exit’ stories. I’m pretty sure these are the same quotes that were bandied about a couple of weeks ago (see January 19th), so there’s nothing new there. I have been told that he’s more likely to sign a new deal than leave, but that was before the signing of Reyes, so we’ll just wait and see what happens with him.

Finally, if I told you about a site called arseratings.com you’d be right to think of a place where we could see pictures of Kylie’s posterier, compare them to other peachy behinds, rate them out of 10 and have a great old time altogether. Sadly it’s just a place where you can rate Arsenal players performances. Check it out if you can stand the disappointment.

Right, another week of grammar, punctuation, tenses, conditionals and subjunctives ahead. I simply can’t wait.