08.48 – There really is only one story worth talking about this morning, and that’s our new record signing (£20m)José Antonio Reyes. He’s been a player much coveted by Arsene Wenger, and for a long time we’ve heard stories of Steve Rowley spending more time in Seville than at home to watch him train, to watch him play, to find out as much about the man as the footballer. Rowley’s reports further convinced Wenger, who convinced Double-D, who convinced the board to smash Arsenal’s transfer record to bring him to the club. Confirming the transfer on arsenal.com, the boss said “We have a game based on movement, technique and pace. Reyes has all that. We have been following him for a year.”

He’ll have his medical tomorrow and may travel to watch the Boro game. There should be a press conference on Thursday to official introduce the player. 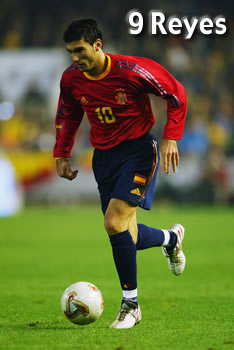 So what do we know about Reyes then? He’s left footed, can play wide or up front, he’s scored 21 goals in 84 La Liga games, and has won three Spanish caps. Some facts here, and there’s a more detailed analysis of his stats here from Planet Football.

Anyone who was lucky enough to see Seville beat Real Madrid 4-1 in the league earlier this season will have witnessed a master class from Reyes. He tore Madrid to pieces that night – Sid Lowe in the Guardian tells the story better than I ever could. We know he’s going to wear the number 9 shirt, so that’s a big cheerio to Frank Jeffers then.

From what I’ve seen, and I’ve made a point of watching him since we were linked to him, he’s an extremely talented and creative player who will be a real asset to the squad. I think that his long term future is the Bergkamp role, playing just behind Thierry Henry and providing the passes for him and Ljungberg.

One thing we have to do though is give him time to settle in England. He’s a Seville boy through and through, oranges and bull-fights and 40c summers. It may take him a little while to adjust to life in the less sunny climes of N5, but I’m sure the boss will bed him in slowly. I now fully expect him to make a quite sensational debut against Manchester City, scoring a Bergkamp v Leicester type hat-trick – although it has been suggested he’ll be banned for that game following a suspension in La Liga.

It’s a very exciting time for the club. This signing, along with the extremely promising youth players we’ve got coming through, the wonderful players that grace the first team at the moment, the new stadium about to be announced officially even though it’s fairly obvious work is going ahead (and we wouldn’t be buying anyone if the finances weren’t in place), top of the table, in the last 16 of the Champions League, and the best manager this club has ever had taking us forward and making us better. This signing shows the ambition of the club and sends a message to the fans, to the players like Henry and Vieira and Pires and Campbell, and to the rest of the Premiership and Europe that Arsenal really mean business.

What I think also needs to be said is that arrival of Reyes should in no way be seen as any sort of sign that Thierry Henry is going to leave. From what I’m told it’s not beyond the realms of possibility that another striker could join before the end of the transfer window, and even if that happened it wouldn’t mean Henry is moving anywhere. The Arsenal board didn’t sanction a purchase of this magnitude to replace Henry, they did it to strengthen the team that Wenger is building around Thierry (amongst others). So no matter what you read about Henry going to Madrid, to Barcelona, to Milan, to anywhere in the world, don’t worry. It won’t happen. We have significantly improved our squad with the signing of Reyes. Enjoy it and welcome to a world where Arsenal have some money to spend again. I do suspect that Reyes arrival means the end of both Kanu and Wiltord though, whose contracts expire at the end of the season.

Lost in the enormity of this signing is the fact that we have a Carling Cup semi-final to play tonight. We go into the game a goal behind on aggregate, and the carrot of playing Bolton in the final should we progress. There’s likely to be the same mix of kids and first-teamers, with Bentley and Quincy likely to start up front, with Parlour, Edu, Vieira and Gilberto making up a very strong midfield. Fingers crossed they get a result oop norf later on.