07.33 – So Arsenal made another signing yesterday. 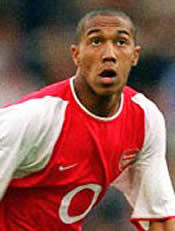 Young French left-back Gael Clichy was officially announced as a new recruit by the club. Arsene Wenger said of him “Gael’s performances this pre-season were very impressive. He is still only 18 and will benefit greatly from the experience of his new teammates.”

Giovanni van Bronckhorst is looking forward to tonight’s friendly against his old club, Rangers. “I had three beautiful years at Rangers….going back for the first time is going to be quite emotional.” Hope he gets a game then.

Patrick Vieira will play some part, but there’ll be no Henry, Pires or Wiltord who should make their first appearances in Sunday’s Charity Community Shield against Man Utd.

Flush with cash from selling Damien Duff to Chelski, Blackburn are after Francis Jeffers. According to Graeme Souness “We have made an enquiry for Jeffers, but were frightened off by the asking price.” Arsenal are apparently looking for £5m for the fox in the box. It’s believed some further negotiations will take place though, and it does appear as if Arsenal are willing to sell.

Rangers defender Michael Ball is looking forward to playing against Arsenal now that Marc Overmars is gone. “I used to hate facing Overmars. I remember the last time Howard Kendall put me at right-back for the second half and I didn’t find it very funny.”

I found it funny though. My, how I laughed. My aching sides. My ribs were tickled. And so on and so forth.

Rangers v Arsenal tonight at 7.45pm. Apparently the streaming business on arsenal.com was a bit hit and miss, with reports of refunds being offered. Whatever next? Anyway, must go so I must. Later.