07.36 – So Arsenal finally realsed proper pictures of the new away kit yesterday. A return to the traditional yellow and blue, the way it should be. Apart from that minging crest of course. 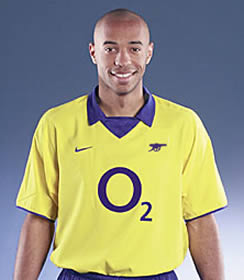 We much prefer the one in the picture to your left – thanks to Stevie C for that one. Compare and contrast that pic with the ones on the official site. How anyone can prefer the new crest is just beyond me. The cannon is simple, classic and doesn’t look like it was knocked up by somebody with ‘Photshop for Dummies’. Maybe when Adidas start making our kits next season….ssshhhhhhh.

AW has had a bit to say in recent days. Firstly he’s warning Chelseaship Manager 4 and the others not to write Arsenal off just because we’re as poor as poor can be. “I am convinced we are competitive and will be fighting up there with the others this season.”

He’s also been talking about the keeper situation.His original 9 day dealine seems to have been extended though. “I would prefer to have a keeper by now. I am in a situation where I have to buy. Earlier in the summer I was in a situation where I expected David Seaman to stay, then he told me he wanted to play on. So it is a little bit late but I am sure we will find a goalkeeper. We have Guardalben on trial and we have to make a decision in the next two or three weeks.”

So we should know who our new keeper is on the 12th of never.

Patrick Vieira has had a bit to say too. Lazy copywriters have been running this story under ‘Vieira threat to Arsenal’ headlines all day. It might be better to say ‘Vieira states the bleedin’ obvious.’

Here’s what he said “Either I prolong (my current deal) or I go to the end of my contract”. Ok. We kind of knew that. It’s not a great shock. The good news is that from the rest of it, it seems like Paddy wants to stay and even hints at a couple of new signings.

“The discussions are well on course and I am optimistic. I want to stay at Arsenal but everything must be resolved before the start of the championship. You can see that the transfer market is totally flat. I know the club are working on certain dossiers. It will work itself out.”

To me that’s a message to the board to sort everything out. He wants to sign, the club want him to sign, it’s a matter of crossing Ts and dotting Is now I reckon. Ts being great chunks of cash every week, of course. Don’t believe the stories about him demanding Arsenal sign 3 players or he’ll leave. They’re rubbish. Jerome Anderson, his agent, said as much on the radio yesterday morning.

Paddy also spoke out about Sepp Blatter in the wake of Marc Vivien Foe’s death. “I was outraged by Blatter’s reaction at half-time of the France-Turkey match when he said the final would go ahead. It was a decision for the Cameroon players. What a lack of respect.” How about telling him where to shove his Confederations Cup, Paddy?

Any move for Jose Antonio Reyes was put to bed when the Seville starlet signed a new deal keeping him with his current club until 2010 with a release clause of €100m. According to the Spanish press, Kanu is a serious target of Celta Vigo which could open the door for some guy called Daniel Moreira. He’s quoted as saying “Yes my agent will eat with Arsene Wenger on Tuesday. There are also other possibilities that could accelerate my departure from Lens. Arsene Wenger likes me a lot but there are too many attackers at Arsenal. They hope to sell Kanu to be able to recruit a forward and therefore I wait for this Tuesday’s talks to know more.”

Hmm, ok. That’s plenty to be going on with. Till later.