07.36 – It’s always a sad day when an Arsenal legend retires, and despite having spent 2 years at Arsenal’s retirement home at Upton Park, Nigel Winterburn has decided to call it a day.

He did spend some time of his Arsenal career at right back, but he only ever had a left foot. The right one was just for standing on. Part of the legendary back 4, he’ll always be remembered by Arsenal fans as a player who always gave everything on the park. He was a real winner, a genuinely nice guy and capable of scoring some cracking goals….every 23 months or so.

Who will ever forget his goal against Chelsea in the double season of 97-98? Last minute, 35 yards, boof, eat my goal. He’s picked Anfield ’89 and the 98 Double as his career highlights. How he didn’t get more England caps is beyond me. Tony Dorigo? Graeme le Saux? Please. Best of luck in the future Nutty.

Kolo Toure has urged Arsene Wenger to sign his brother Yaya. Kolo said “I think he could be a great player for Arsenal. I think he’s a better player than me anyway.”

Strangely, Arsenal have seen fit to make comment on the Jens Lehmann transfer situation. It’s just a repeat of the David Dein quotes I gave you yesterday, but it’s a bit odd that they’re on the arsenal website as Arsenal generally have a very strict policy of not making any comment about transfers at all. 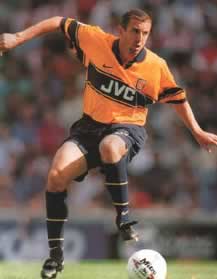 Some good news, Igors Stepanovs could be off to feeder club Beveren. Well, there’s a 1 in 3 chance as Stathis Tavlaridis or John Halls could go instead, but I think we might as well get shot of the ginger Latvian. I think all of us would prefer to see John Halls get a chance if needed. I just don’t see the point of Igors.

Freddie Ljungberg speaks about Chelsea and transfers, “I think we are still looking for some new players which will strengthen the squad a little bit. The manager has said he wants to do that — and I think he will.”

Right, have a fun day at work/school/hostibal etc