Ok, it doesn’t quite scan, but you get the idea. After months, if not years, of speculation, the captain has signed a new 3 year deal. In an exclusive in the News of the World Vieira says “I still believe we are the best team in the country — and we will continue to prove that next season. Other clubs can spend as much as they want but we know that we still have enough here to win the title back. I want to be a part of the future of this club and I want to win the title back for Arsenal.”

It had been a s situation. Anyone who says they weren’t even the slightest bit worried about him signing a new deal is telling fibs I reckon. But now he’s signed, Thierry signed before the cup final and we wait to see what will happen with Robert Pires and Dennis Bergkamp’s contracts over the next week or two – and of course we await a couple of new signings. Paddy says “The most important thing is to keep the players we already have at the club before thinking about adding to the squad. Yet the Champions League demands the best and it would be nice to attract more talent to the club.” 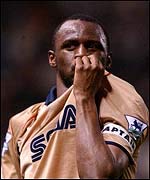 Don’t underestimate the importance of this Vieira thing. If Arsenal had sold Vieira in the last year of his contract, it would have been a signal that we were a selling club, that our best players were dispensable to help fund the new stadium. The fact that we’ve been able to pay Vieira £11m over 3 years is a good indication that there’s still a couple of quid floating around Highbury somewhere.

Well played Patrick, we’re all chuffed. Not sure about this outfit though.

In the same News of the World article, they have an interview with Argentinian goalkeeper Sebastian Saja who says “I have been told to expect officials from Arsenal to speak with me in the next seven days. Talks are at an advanced stage between the clubs and a fee has been agreed.”

He was first linked with us back in August, but now he reckons he’s on the way to THOF. Perhaps we’re going to have some kind of deathmatch between himself and Oscar Cordoba to see who gets the number 1 shirt.

It’s also been reported – although I can’t find a link – that Chelsea made a £30m bid for Thierry Henry during the week, which was rejected out of hand by David Dein. This guy Abramovich may have pots of cash, but he obviously doesn’t have the first clue about football. For a start Arsenal wouldn’t sell, and even if they did accept that bid there’s no way Thierry would go to Chelsea. So having been knocked back by Arsenal, he’s now turned his attention elsewhere. Nothing like being realistic.

Ok, that’s your lot. Have a nice relaxing Sunday and keep whistling the Vieira tune wherever you go.