10.53 – “Such is my desire to remain with Arsenal that I have even declared I would be willing to accept a lower salary. I have shown a lot of loyalty to this club over the years and would like to think they will now be loyal to me.” 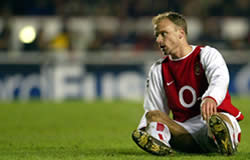 Dennis Bergkamp spoke yesterday about his situation at Arsenal. After 8 years at the club it seems he’s being fucked around by the board who are unwilling to make any kind of concession to a player who has been instrumental in the success of the club over the last few years.

His signing was a major coup for Arsenal, and without him it would have been much more difficult to attract the kind of players we have. He’s a sublime talent, and while his form has been patchy at times, you just have to see what a 37 Gianfranco Zola was able to contribute to Chelsea last season to see what Dennis still has to offer. He’s fit, in good shape and to my mind he definitely deserves another year. Letting him go would be a mistake.

He went on to say “I decided some months ago I wanted to stay when Arsene Wenger made it clear he also wanted me to sign for another season. I have been disciplined throughout my career and I know I have the ability to play at the very highest level for one more year if not more. Right now, I have just one goal and that is to play for Arsenal again.”

According to Bergkamp’s agent Rob Jansen “Sometimes we have the feeling that we have tried everything and Arsenal have hardly moved. They say, `We have no money, the new stadium is coming so take it or leave it’. He will either stay with Arsenal or stop playing football.”

The thoughts of such an ignominious end to a great career is very sad. I really hope Arsenal can show him a little bit more respect and not let his Arsenal career end like this. In a close season when we’ve lost David Seaman and Oleg Luznhny we need to keep some experience in the side. Dennis and Martin Keown are almost the last of the ‘old men’ in the side (even if 34 isn’t really that old). The fact that he’ll quit football altogether if he can’t play for us says it all.

How about we get rid of players like Stepanovs or Tavlaridis whose contribution to the side has been minimal at best? Cut our losses on players like Jeffers or Kanu? Pass on the savings to Dennis. Do something. Don’t let him go like this. It’s almost criminal. If Arsenal can’t find a solution to this, we’ll have seen the passing of another era. Not only the end of the Bergkamp era, but Arsenal’s reputation for doing things the ‘right way’ will be well and truly buried.

You can find more from Dennis on icons.com

We mentioned Oleg earlier, and it seems he’s going to sign for Wolves. Good for him. I hope he gets his first Premiership goal against Man Utd/Spurs/Liverpool…etc

Looks like the Cordoba deal is almost done. We’ve been advised that the next couple of weeks are going to be busy ones at Arsenal. There will be signings, so don’t worry. Also, there will be some departures too. No names, no pack drill.

Have a good Saturday. Looks like it’s going to rain here for the first time in weeks.