09.12 – Mornings are shit sometimes. Yawn. But at least we have something of an exclusive for you today. 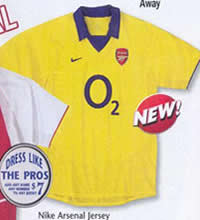 What you see to your left there is what we believe will be the new Arsenal away shirt. Knowing Nike it’s not going to be available until they’ve bent over and taken it every way Man Utd wants to give it to them, but all going well you should be able to pick it up sometime in July or August. 2007.

I like it I have to say. Back to proper yellow and blue, the way the Arsenal away kit should be. Of course the new cartoon logo makes it all look a bit cheap and nasty. It would be a great shirt with just the cannon, like the one to your right. Oh well, beggars can’t be choosers. We should be just grateful they haven’t given us some green or purple thing to wear next season. Thanks to forum regular RandomGoonerbird for scanning that from that catalogue she stole from Nike’s headquarters.

This is one of those mornings where there isn’t a scrap of Arsenal news around. Even the dodgiest of dodgy football sites have nothing new to reports. As you might imagine, this presents a small problem when you’re trying to bring people Arsenal news every morning

Luckily for me the time I’ve spent doing this site has enabled me to build up some contacts and I have stored some info they’ve given me especially for days like this. So here’s a bit of inside info you won’t get anywhere else.

You hear Arsenal players talking all the time about the tricks and skills they see Dennis Bergkamp perform in training. One of the things they don’t every tell you about is Greek central defender Stathis Tavlaridis’ party piece. Standing on the penalty spot he kicks the ball as high as he can straight up in the air. When it comes down he volleys it up to the other end and into the goal. He can ‘score’ 8 times out of 10 with this trick.

Ex-Gunner Nelson Vivas spent 3 months wearing a cowboy hat because Tony Adams and David Seaman told him it was cool. Nelson only took it off for training and matches, but eventually had to throw it out because of limescale around the rim. Or something.

Before a match at THOF against Spurs, Ian Wright soaked a sponge in his own urine and rubbed down the away dressing room before the enemy arrived. Benches, pegs, sinks, taps, the whole lot. The entire Sp*rs team went out that day stinking of Wrighty’s piss. Arsenal won 3-1.

Right, hopefully tomorrow we’ll have real news so I can keep my secrets secret.