16.55 – Welcome to yet another brand new month on Arseblog.

And what a month coming up. Man Utd, Valencia, Sp*rs, and Liverpool all coming up, and let’s hope those 4 end up like the turkey that lives as we speak, but is set to end up on your dinner table later this month. Ripped apart and stuffed up the arse(nal). 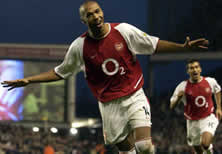 Arsene Wenger reckons Thierry Henry should be a leading contender for European Footballer of the year. The current favourite is 3 week wonder, and scoffer of most pies in Madrid, Ronaldo. Fair enough, he had a spectacular World Cup, but 3 weeks of good form doesn’t come anywhere near Henry over the last 18 months.

His performances have been outstanding, his goalscoring record second to none in England, and if he finishes below the goofy Brazilian, we can write this award off – however prestigious it thinks it is – as not worth a fish’s tit.

As it’s a new month, I better give you one more chance to enter the competition. Full details here. Also, if you’ve fancied yourself as a bit of a match reporter, why not visit the new match reports forum, and give us your version of the last match you saw, whether at the game or on TV. It’s still virgin territory, so who will be first to deflower our forum? Go on, you know you want to….

Today, as you may or may not know, is World Aids day. Tell your kids about it. Scare them a bit, because it’s a scary thing. Learn some more about it. Give a few quid to an AIDS charity. Just don’t think it’s something that can’t happen to you or your friends, because it can. Don’t just ignore it. Look at the facts. Told you it was scary.