11.25 – Well, there’s nothing like the bitter whine of the scousers, especially after an Evertonian wins a dodgy penalty to prevent them stealing 3 points. 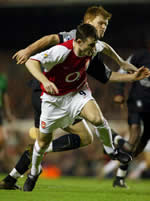 Look at it again though. Riise definitely pulled Jeffers shirt. Only slightly and well before Frannie fell over like he’d been hit by a cannon ball. Riise told Houllier he didn’t pull the shirt, and Houllier said Riise didn’t pull his shirt. Look at the replay boys. Riise is lying, and Houllier is having another one of those moments when he fails to see anything wrong. It seems Mr Boggly eyes is suffering from from a case of severe Wengerific Myopia.

If I was a Liverpool fan, I would be very dubious about Houllier’s ability to bring the title to Anfield. Anyway, word is he’s moving upstairs and David O’Leary is going to take over as manager. Maybe he can do something about the negative style of play, which must trouble the Liverpool fans as much as the fact they haven’t won the league for going on 13 years now.

At the bottom of this Sun article, Teddy Sheringham says “I really don’t know what has happened with Sol. I always got on fine with him. It’s as if he has got something against me.” How many times do we have to explain this to you, Tedward? Click here, then click on any of the coloured bars 5 times….sheesh.

Tomorrow, we’ll do something about the top 10 moments of year or something like that, seeing as the fabulous 2002 is coming to an end…