After their recent dictate about red cards, FIFA – in their wisdom – have now decided that referees cannot use video replays to overturn decisions. Instead, they’re going to conduct an experiment in next years Confederations Cup where two additional linesmen will be positioned behind each goal. No, really, I’m not making it up.

The new scheme is the brainchild of Michel Platini, who was without doubt one of the greatest footballers I’ve ever seen. However, he now seems determined to make a name for himself by trying to make up all sorts of new rules. He was one of the big supporters of the ‘World Cup every 2 years’ scheme which fell by the wayside due to it’s high Neville of stupidity. Message to Michel – Bosman is a more famous name in football than you, you curly bitch.

It’s absolutely ludicrous that in an age where we can now see matches from every conceivable angle, FIFA seem determined to turn their back on technology and have essentially made referees dictators (not that some of them aren’t already) whose decisions cannot be questioned or overturned – even when video can prove them to be completely incorrect within seconds. But it doesn’t stop there. Video replays will still be used to punish a player retrospectively. A FIFA gobshitespasticheadwanklordshitforbrainsspokseman said “There has to be a clear distinction between using video evidence to impose sanctions on players who break the rules behind the referee’s back, and using video to change referees’ factual decisions at a later stage.” Er…why? Give me one good reason. Twats. 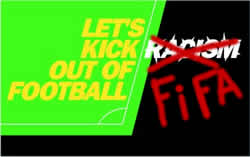 Much better news is that Robert Pires is fit again, but AW will make him wait another 3 weeks on the advice of doctors. 21 days till the return of Bob. I’m marking the days off my iCal as we speak….