15.32 – Right, Roy Keane has been sent home from the World Cup. This morning, he gave an interview with the Irish Times and an interview with RTE radio criticising the conditions the players were expected to train in, the travel arrangements and the general preparation of the Irish squad.

Ireland manager Mick McCarthy then called a players meeting – which as we get more details of it sounds more and more like a kangaroo court – that developed into a ‘slanging match’. He said he ‘wasn’t prepared to tolerate that kind of abuse’ and sent Keane home. After claiming Keane had ‘personal problems’ the other day, McCarthy has now spoken publicly about a meeting that should have been private. Keane’s alleged ‘personal problems’ were simply the disagreements he has with his international manager, who is really nothing more than a puppet of the FAI. Better to make your captain look like a mental patient though eh?

If you read the interview, you can see that Keane is being fairly blunt, but in my opinion, he’s quite entitled to say what he said. There are some who will say that it should have been said in private, but it’s unthinkable that Keane hasn’t already had plenty to say about it, before his interviews.

Listening to Irish radio news, one reporter said he’d spoken to other players about the things Keane was complaining about it and they agreed that they were sub-standard but ‘…sure, we’re used to it’. Typical.

Keane wanted Ireland to do well in this tournament. He expected, and is right to expect, a certain level of professionalism which just isn’t there. As captain, he’s right to speak his mind when it’s obvious that trying to deal with it behind the scenes makes no difference. He’s going to get a lot of flak for this in Ireland I expect, but if you’re looking for someone to blame, look straight at Mick McCarthy – the man who arranged to take an international squad to an island that didn’t even have a football pitch. For fucks sake.

McCarthy backed Keane into a corner with this meeting, and when it backfired on him he cut his nose off to spite his face, and fucked up Ireland’s World Cup chances. It’s yet to emerge, but you can almost feel the grubby paws of the FAI all over this. Still, at least we have Lee Carsley eh?

Maybe it’s odd for A R S E B L O G to be so supportive of a Man Utd player, but Irish football has been rotten for a long time, and it’s about time somebody tried to open the eyes of the “Olé, Olé, Olé” brigade. Well done Royston. 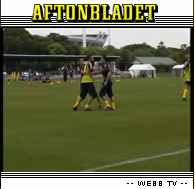 It seems training groud bust-ups are de riguer in the build up to this World Cup. To your right, you have a screenshot of Arsenal’s Freddie Ljungberg reacting to a late tackle from Aston Villa’s Olaf Mellberg.

Freddie jumped up and started pushing Mellberg, who pushed him back and the pair of them ended up scrapping on the floor like a pair of kids. Freddie says “You can’t tolerate tackles like that, you have to respond”. The pair have since made up apparently. To see the full video clip – go here. You’ll need Real Player.

Last but not least, that Seville forward, José Reyes, we’ve been linked with is apparently ‘in talks’ with Arsenal. More from One Football.

08.45 – More on Roy Keane and Ireland here. It’s like I thought, he can’t cope with the unprofessional way the Ireland squad is being run. Maybe he over-reacted, but he’s right to say something if you ask me, and like I thought yesterday, he’ll retire from international football after the World Cup.

England’s hopes are in tatters after it’s revealed that Danny Murphy has been injured, Beckham is behind schedule, Dyer is still bollixed and Nicky Butt is also injured and completely shit. No need to worry though – Trevor Sinclair is waiting in the wings, again…….heh.

Meanwhile, on the Arsenal front, Francis Jeffers has had an operation on his troublesome ankle here. The Arsenal medical team are confident he’ll be fit for at least 6 games next season.