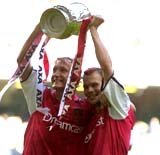 Just after the final whistle, Sky’s reporter got hold of Freddie Ljungberg and asked him how it felt to win the FA cup. Freddie’s off the cuff reply was “It’s fuckin’ excellent…..”

Surely two of the best goals ever scored in the cup final won us the game today. Ray Parlour did one of those things he’s always capable of doing, but very rarely does. A magnificent shot from outside the box that Bergkamp would have been proud of. Time literally stood still when he scored, I couldn’t believe it.Then Freddie got the ball inside his own half, took off running, skipped past some challenges and curled in an absolute beauty to put us 2-0 up. From then on it was sewn up. All credit to Chelsea, they played really well and it was obvious JFH was not fit, but all the same it was lovely to see their players and fans suffering.

That’s the first trophy this team has won since 1998, way too long. This feels really good so I’m off out to sink a few pints. More thoughts tomorrow.