22.15 – My thanks to Dominic, and some other bloke with a load of letters and numbers for an email address instead of his name, for reminding me of the last Irish player to play for Arsenal. 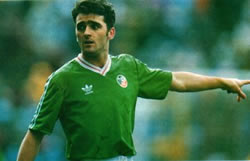 Yes, ladies and gentlemen, it’s none other than Steady Eddie McGoldrick.

I firmly believe that the Arsenal board first started to get suspicious of George Graham’s transfer dealings when he flogged Anders Limpar to Everton, and then spent a million quid on Eddie. There just had to be brown envelopes involved there.Whoever came in to replace Anders was always going to have a hard time, but I remember some quote being attributed to Eddie along the lines of “I wouldn’t piss on an Arsenal fan if they were on fire”. Oooops.

Still, he did score a fantastic goal during the 7-1 thrashing of Standard Liege. A long throw from Seaman, Merson got it somewhere, played it up the right hand side to Eddie, who took the ball, cut inside and hammered a shot into the top corner. And that was about it. I can’t ever remember seeing that goal since. If anyone has it please get in touch.

Eddie then went off to Man City, got lost in the 500 strong professional squad they had at the time, then went to Stockport County and then disappeared off the face of the earth. I think he’s managing a conference side at the moment, but don’t quote me on that.

Arsenal was like a little Ireland in the 70s and 80s – with Pat Jennings, Pat Rice, Sammy Nelson, Liam Brady, David O’Leary, Frank Staplegun, John Devine and I’m sure there were a couple more I’ve forgotten. Before anyone gets all pedantic and starts telling me that some of those players were Northern Irish, I do realise that. But, when you’re a small kid and they play in green as well as red and white, you can’t help but like ’em. Not that I dislike them now….oh, you know what I mean. I cheered for Norn Iron in the ’82 and ’86 world cups. I’m not ashamed…..*ahem*……

Ronaldo would like to play for Arsenal. Just remember where you heard it first…..

Have yet to see the new Star Wars movie – I have to find it in English here, otherwise you end up listening to the same 5 Spanish people who seem to dub every single tv show and movie shown here. If there’s a child in the particular program or film, they just put on a child’s voice. It’s all very eerie.

09.14 – Right, it looks like Arsenal news is going to be thin on the ground for the next few weeks. Everything is going to revolve around the World Cup, so I guess we’ll just have to focus on that, and the Arsenal players involved.

Obviously my first thoughts are with Ireland, although I think we’ll struggle in our group. Cameroon are no walkovers, and unless we can pull another performance like Italy in ’94 out of the hat when we play the Germans, we might not last beyond the group stages.To have any chance of doing anything, we need Roy Keane to be 100%. Sadly though, there’s no Arsenal connection in the Ireland squad – and off the top of my head, I can’t remember the last Arsenal player to play for Ireland. Was it O’Leary? Anyone?

England – well, I wish the 4 Gooners well, and hope that it’s not their fault when things go wrong. It amazes me that they continue to have such problems on the left hand side of midfield. Since Wenger’s reign began, it’s been a rare occassion when we’ve actually had a left footed player in that position. Overmars and Pires were both right footed – and I was surprised when McMananananananaman was left out. Maybe SGE might play Wayne Bridge at left back and use the attacking skills of Ashley Cole on the left of midfield. Also, Heskey is a useless lump.

France – I think they can win it again. They have quality right throughout their sqaud – class at the back with Desailly, Thuram and Lizarazu. Top class midfielders like Vieira, Petit, and Zidane and up front Trezeguet, Henry, Cisse and Wiltord are all more than capable at this level. If Bob had been fit, I would have had them as nailed on certs to lift the trophy again, but as it is, I think they have to be favourites anyway.

Sweden – Can Freddie win the World Cup single handed? It’ll be interesting to see him play against his Arsenal colleagues when Sweden take on England. Everybody knows about Freddie now and those runs he makes, but can anyone do anything about it? Let’s hope it’s Rio Ferdinand he makes a monkey of, and not Sol.

So, 15 days and counting. Have you made up your excuses for work yet?