10.15 – Thanks to Nicki who provided me with a detailed explanation for the Holland / Dutch thing. Apparently, it’s all because the Germans invaded the Netherlands and went around from town to town hitting people with long sticks and saying ‘You’re Deutsch’. Yes, they said it in English too.

If this isn’t the best Arsenal picture for a very long time, I don’t know what is. 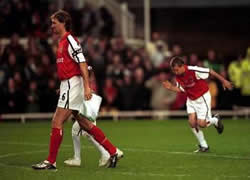 Tony Adams’ testimonial is on the TV at the moment – Celtic are winning 1-0, but the Arsenal back 5 to start the game was Lukic – Dixon – Adams – Bould – Winterburn. Can any stattos tell me the last time that combo played together? Great to see them all out there again. It’s easy to say ‘Oh, we’ll never see their like again’, but as Arsenal fans, we should feel privileged to have seen these guys play together. We’ll never see their like again.

If he does decide to retire in the summer, we can only hope he comes back to Arsenal at some point in the future because no player has epitomised the club more than Tony Adams.

Do you play football at the weekends? Do you want people to think you’re Thierry Henry? Have a look at this.

A scurrilous transfer rumour comes in from ‘The Avenell Shadow’. He claims Arsenal have agreed a fee for Stephen Carr from Tottenham, and that Kanu is going to Deportivo la Coruña for £7.5m. We shall see.

11.05 – If people from Ireland are Irish, and people from Scotland are Scottish, why aren’t people from Holland called Hollish? Where does the ‘Dutch’ thing come from? Anyone……??